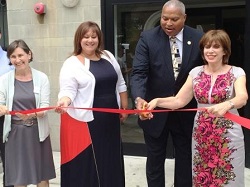 July 24, 2015 – The New York State Office of Temporary and Disability Assistance (OTDA) recently helped celebrate the grand opening of The Morris, a 39-unit building in the Bronx that includes 19 units set aside as permanent supportive housing for survivors of domestic violence and their children.

The $13 million project, developed by New Destiny Housing, was supported with $3.1 million from OTDA’s Homeless Housing and Assistance Program (HHAP).

“New Destiny continues to be a consistent, reliable partner that brings integrity and passion for developing housing for homeless and low-income adults and families, in particular those who are survivors of domestic violence,” said OTDA Commissioner Samuel D. Roberts. “We expect this project will have a transformative effect on the lives of those who now call The Morris home.”

The building, originally intended as affordable condominium units, was constructed in 2010 by a private developer. But with not enough units selling, the building remained vacant. New Destiny eventually purchased it and converted it into permanent supportive apartments.

HHAP has previously partnered with New Destiny on four other projects.