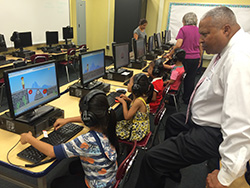 OTDA Commissioner Samuel Roberts at the computer lab with students from the Utica Refugee Summer Academy.

August 27, 2015 – The New York State Office of Temporary and Disability Assistance (OTDA) announced on August 20th that $50,000 in state funding is being awarded to the Utica City School District to help refugee youth and young adults prepare to enter the workforce. The funding comes from the OTDA’s Making a Connection Program (MAC), which aims to strengthen connections between refugee children and the community by focusing on newly arriving 16 to 21 year olds that have not succeeded in a traditional classroom setting.

The MAC program would supplement an existing Refugee Summer Academy in Utica that helps school-aged children get a head start on their fall studies and adapt to their new community.

“The Summer Academy makes sure refugee children have the support, information and familiarity with teachers and new friends they need to be successful,” said OTDA Commissioner Samuel D. Roberts. “This additional funding will focus on children who may be too old to benefit from that approach, but still need assistance addressing the wide-ranging issues facing newly arriving refugees. This program focuses on providing the youth and young adults with the skills and knowledge to make healthy choices that can lead to social and economic self-sufficiency.”

The two-week long summer academy uses the “Welcome to Our Schools” program curriculum, developed by OTDA to help refugee children and their families adjust to American schools. State and local officials toured the Refugee Summer Academy being held at Roscoe Conkling Elementary School as part of Capital for a Day. There are 63 students in grades K-12, who speak at least seven languages, who are preparing to start the school year in Utica.

To see students and teachers from Utica’s Refugee Summer Academy in action, click here to watch a short video.

Over the last 10 years, more than 4,000 refugees from around the world have been resettled in the Utica area, the fourth largest resettlement area in New York State. The top refugee groups to resettle in New York State have been Burmese, Bhutanese, Somali and Iraqi.

OTDA has been instrumental in coordinating public and private partnerships to strengthen communities that welcome our newest residents and supporting those efforts through several federally-funded programs. These include efforts to help refugees with employment preparation and placements, and transitional supports to help with any impediments to employment and self-sufficiency.

OTDA currently has $4.2 million obligated in contracts statewide to provide employment programs alone to refugees who have been in the country for less than five years.