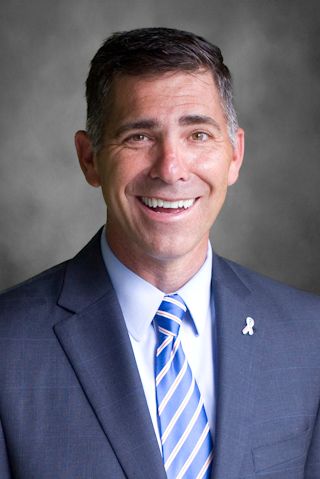 Michael P. Hein was appointed Commissioner of the New York State Office of Temporary and Disability Assistance in February 2019, by Governor Andrew M. Cuomo and confirmed by the Senate in June 2019. He leads a state agency charged with oversight of support programs and economic assistance for low-income New Yorkers. These programs help thousands of households meet basic needs including housing, food and energy related costs. The agency also oversees child support services and makes determinations of medical disability for certain programs. In this role, Commissioner Hein is responsible for providing oversight and guidance to county departments of social services.

Prior to joining OTDA, Commissioner Hein served as Ulster County’s first County Executive, taking office in 2009. He developed a strong record of leadership and innovation while building a reputation as a statewide leader in government reform, resulting in his being named one of the top elected officials in America by Governing Magazine.

As County Executive he envisioned and delivered New York’s first Restorative Justice and Community Empowerment Center and many other social-justice based initiatives including the construction of a SUNY satellite campus adjacent to an inner-city high school dramatically improving access to higher education. In addition, as a result of his statewide environmental leadership and model sustainability actions, National Geographic Magazine featured Ulster County’s environmental achievements in its December 2016 edition.

During his time as County Executive, he led efforts that resulted in functionally ending homelessness among Ulster County’s veterans, while coordinating comprehensive support services to greatly improve long-term outcomes for all those in need.

Commissioner Hein came to government service with a background in banking and business. He began his career in public service as Ulster County’s Deputy Treasurer and was elevated to County Administrator prior to his election as County Executive.

Commissioner Hein graduated with a B.A. from Eckerd College with a concentration in management. He lives in Hurley with his wife and son.